Opportunity To Fly On A WW2 B-17 In Shreveport Behind the controls of an aircraft, Tom Ewing feels at home. Growing up in Shreveport, he learned to fly as a boy at the Shreveport Regional Airport. He comes from an aviation family; his grandfather flew fighters in World War One. When you ask him when he decided he wanted to become a pilot, he says “I didn’t choose it, it chose me.”

After a 35-year career flying for the airlines, he decided to retire. Living in Naples, Florida, Ewing was still living to fly. He acquired a unique set of piloting skills. Skills that make him one of the most unique pilots in the world. That’s why when the Experimental Aviation Association (EAA) was looking for a pilot qualified to fly the B-17, a World War Two heavy bomber; Ewing was at the top of their list.

Today, he’s one of a select few volunteer pilots who take the controls of Aluminum Overcast, a B-17 built in 1945, at the end of the Second World War. Today EAA operates one of only 11 B-17s that are still airworthy.

Aluminum Overcast is the outreach aircraft that EAA takes on tours around the country. Their main goal is to reach out to World War Two veterans who serviced on the aircraft. “There aren’t very many of them left.” He said. “Seeing a 90-year-old veteran transform back into a 20-year-old aircrew member” is why he does it.

The B-17 isn’t an easy plane to fly. Produced from 1942-1945, it has none of modern controls and instruments that a modern aircraft has. “It’s a lot more difficult than flying an airliner. If you don’t watch it, it’ll bite you.” Don’t let that scare you, the pilots who fly Aluminum Overcast are some of the most experienced pilots in the world.

Sitting in nose offers a view unlike anything else.

The EAA was established to bring grassroots pilots together. It supports aerobatic and experimental aviators in addition to taking veterans on honor flights in Aluminum Overcast. Anyone can buy a ticket for a ride in the B-17, and Ewing promises it’ll be a once in a lifetime experience. 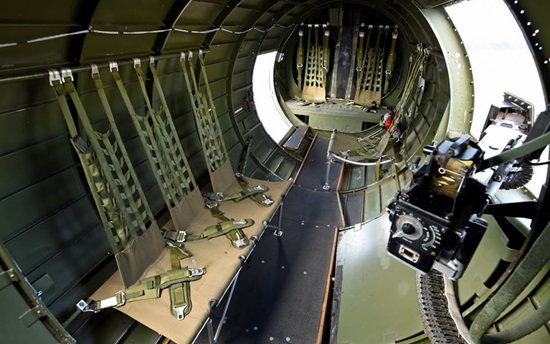 In addition to the ride, people who buy a ticket for the flight are given a full briefing from the flight crew. “We want people to understand what these guys went through, to be away from home for the first time, never stepped foot in an airplane before, and now you’re a gunner in a B-17 flying at 25,000 feet, with no windows and 180 mph air flying in your face, battling German fighters and anti-aircraft guns.”

Aluminum Overcast will be making a stop here in Shreveport at the end of October 2017 (27, 28, 29). The public may book a flight here or a ground tour. For people who book the flight, they’ll experience something they will never forget. For Tom Ewing, it will be a homecoming. Ground tours start at $10 ($20 for family) and an actual “Mission Flights” are $409.

Here is the video we took while on the flight in Shreveport at the Downtown Airport: