This Memorial Day, we want to make sure that as many people as possible understand that today is more than just enjoying good company at the lake or cooking burgers in the back yard.  It isn’t that we think much of Shreveport doesn’t respect those who have served, fought, and died for our freedom; we all just need reminders.  Being in a free country away from the hell of war, it’s easy to lose sight.  This post is to honor those who have tasted the bitter ash of battle so that we could live in peace. Today, and every day, let us all honor those who made the ultimate sacrifice for our freedom. Here are just of a few of them.

On April 26, 1968, amid heavy enemy fire, Pfc. Milton Lee singled-handedly destroyed an enemy emplacement in Vietnam.  He was mortally wounded while attacking a second.  Lee received the Medal of Honor for his bravery.

Chief Petty Officer Reeves and Lt. Commander Kelsall, both graduates of Caddo Magnet High School, were among 30 other Americans and allies killed when the helicopter they were aboard was shot down over Afghanistan.  Officials believe the attack was orchestrated by the Taliban. Both men were Navy SEALs.

Staff Sgt. Michael Garcia was killed by an improvised explosive device on July 4, 2011. Garcia was a recipient of the Bronze Star with a “V” for valor, 3 Purple Hearts, and many other decorations for bravery in Afghanistan.

A 1999 graduate of Woodlawn High School, Staff Sgt. Sanders was killed near Baghdad on February 3, 2007 when a bomb went off near his vehicle.  According to those who served with him, he was a model paratrooper and a lead who was revered and trusted by his soldiers. 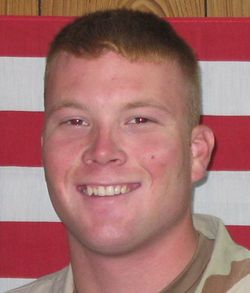 Army Sgt. Nelson was injured by a roadside bomb in Iraq and died a few weeks later on Dec. 29. 2004.  He was 21 years old and a graduate of Airline High School.

Lance Cpl. Huse entered the delayed entry program for the Marines during high school at Huntington in Shreveport.  Huse died in combat in Afghanistan on November 9, 2010.

As you go about this Memorial Day, please take time to remind your friends and family that we’re free because these soldiers – and many others – selflessly fought and died for that freedom.  May the memories of their character and sacrifice live on.